Back to blog / How to Photograph Diamonds 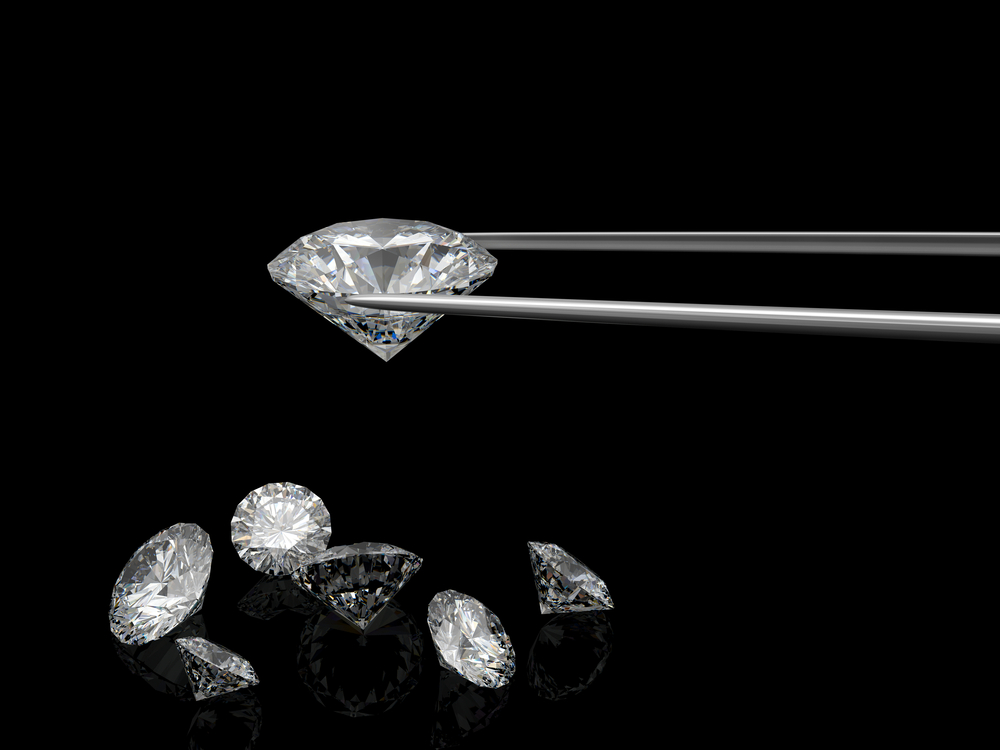 What makes a diamond precious? Is it really the hardest natural material on earth? Explore its remarkable qualities and learn some tips on how to photograph diamonds in this installment of the Gem Photography series.

‘Diamonds are a girl’s best friend’, so says Marilyn Monroe. This hardcore gem is indeed revered for so many reasons including being a symbol of steadfast love. Diamond is the only gemstone composed of a single element—carbon—and its extraordinary qualities are attributed to the arrangement of C atoms in the lattice. Each C atom is connected by strong covalent bonds that make this gem the most durable and hardest natural substance. In fact, researchers claimed that diamonds are 58x harder than anything else you will find in nature.

In continuation of our Gemstone Photography series, let’s now unravel the character that makes sapphire a valuable gemstone and, in the process, a royalty symbol. Towards the end, you will...

How Do Diamonds Form?

Trace elements can influence the color or crystal shape of a diamond, but the highest quality diamonds, ones that are pure carbon, are colorless. Meanwhile, colors in some colored diamonds are due to the impurity of the diamond’s structure. For instance, a little bit of boron trapped in the crystal structure and a little bit of nitrogen replacing the carbon atoms may produce blue diamonds and yellowish to brownish-yellowish diamonds, respectively.

While the earliest diamonds were discovered in India in the 4th century B.C. and later, a small deposit in Brazil in 1725, it was the discovery of diamonds in the Cape Colony in South Africa that revolutionized the world’s supply.

The history of diamonds in South Africa began between 1866 and 1867 in the mining town of Kimberley when a 15-year old Erasmus Stephanus Jacobs found a stone on his father’s farm. A neighbor, who believed the stone was a diamond based on its hardness and weight, borrowed his stone and took it to another friend who later brought it to a Jewish storekeeper who then thought it was a topaz. The stone was passed from person to person – all curious to know what the shiny stone was about.

The stone, later named Eureka, turned out to be a brownish-yellow diamond with a weight of 21.25 carats. This was later sold for GBP 1,500 to Sir Philip Wodehouse.

Diamond is the most valuable, not only of precious stones but of all things in this world.

What’s in a Name?

The word ‘diamond’ comes from the Greek word ‘Adamas’, which means ‘invincible.’ Such a name suits perfectly a stone known for its hardness and luster derived from its ability to disperse light like a prism. This property of dispersion enables a prism to separate white light from other color spectra; thereby, giving diamonds their colorful fire.

Diamond, which is the birthstone for April, is also talked about for its ancient myths and magic properties that transcend different cultures.

For the Pharaohs in 3000 B.C, diamonds symbolized sun, power, life, truth, and courage, but for Ancient India, it represented clarity, invincibility, and protection. In Greek mythology, legend has it that Chronos turned a young man named Adamas into a precious stone. This man was known for his strength, power, and good fortune. Aside from their persistent association with strength, diamonds were also revered in the Middle Ages for their healing power, which includes a cure to mental illness, skin diseases, heart diseases, and stomachaches, among many others. Lastly, the Jewish high priest used to believe that diamonds could determine one’s guilt or innocence. For instance, it was said that the more innocent one was, the more the diamond placed in front of that person would sparkle. This is not surprising considering the existence of priestly breastplate worn by the High Priest of Israelites in the Book of Exodus. In this biblical account, the precious stones on the breastplate were used to determine God’s will.

There are many records of unearthed diamonds that helped shape the history of the world. Among these are as follows.

As mentioned previously, Eureka was the first diamond discovered in South Africa. It weighed 21.25 carats and was brownish-yellow in color. It was later cut to a 10.73-carat cushion-shaped brilliant stone and is now displayed at the Mine Museum in Kimberley.

Fifty light-years away from the earth lie the most expensive star and the biggest diamond ever found. Named after the famous Beatles song, Lucy in the Sky with Diamonds, Lucy is a white dwarf star, which interior core is made of carbon and a 90% crystallized mass; thereby, making it a diamond.

The world’s largest diamond was discovered in South Africa in 1905. It weighed 3106 carats and was named Cullinan in honor of the founder of the Premier Mine, Sir Thomas Cullinan, where it was found. The stone was cut into nine large gemstones and about 100 smaller ones.

One of the large stones cut from the Cullinan, the pear-shaped Great Star of Africa or the Cullinan 1 weighed 530.4 carats with 74 facets. The stone remains to be a part of the British Crown Jewels.

Widely regarded as the world’s most famous diamond, the Hope Diamond, whose name was derived from Henry Thomas Hope, was a Blue Tavernier diamond weighing 45.52 carats. The Blue Diamond has such an illustrious history – from the adornment of a Hindu idol to the hands of King Louis XIV and down to other elite members of the society.  Eventually, the Hope Diamond was bought by Harry Winston and donated to the Smithsonian Institute.

Not all diamonds are created the same and equal, but like other gemstones, clarity, color, cut, and carat weight dictate their value.

Diamond’s clarity characteristics are composed of inclusions, blemishes, and other irregularities. Diamond clarity is relative to the existence or absence of these internal characteristics. While the presence of blemishes significantly affects the value of a diamond, it helps gemologists separate the natural ones from the imitations.

Based on the GIA clarity grading system, a diamond graded Flawless is top grade as this means the stone has no visible inclusions when examined under 10X magnification. However, flawless diamonds are rare.

Colorless diamonds are rare as most unearthed diamonds often have tints of brown or yellow. As such, colorless stones are graded higher than the latter. Needless to say, the value of a diamond is relative to its rarity. The rarer it is, the more valuable it becomes.

Cut quality directly affects the beauty and brilliance of a diamond. Take note that cut here refers not to the shape of the diamond but its symmetry, polish, and proportion. A well-cut diamond exhibits what consumers expect to see when buying a diamond. These expectations are built by three optical effects – brilliance, fire, and scintillation – that make the diamond visually attractive.

According to GIA, different proportion combinations would make light perform better than others; however, the general rule is that the higher the cut grade, the brighter the diamond.

Just like in other goods, the weight of the diamond and its price are directly related but there’s another factor that should be considered here—rarity. For instance, large diamonds are rarer than smaller ones; hence, the former costs more per carat as its value per carat increases exponentially as the weight of the rough stone increases.

Jewelry Photography Tips: How to Make Jewelry Sparkle in Photos

How do you make jewelry sparkle in photos, in the absence of motion? The beauty of diamonds lies upon its sparkle. Your customers are enamored by this breathtaking gem because…

Tips on How to Photograph Diamonds

Frustration mounts when it comes to diamond photography, primarily because diamonds are very reflective. The same sparkle that you want to capture causes light to reflect onto the camera lens resulting in a very problematic image such as excessive glares.

To avoid this, here are a few tips you might want to try next time you’re photographing diamonds.

As mentioned previously, flawless diamonds are rare. This means you’re highly likely to photograph diamonds with inclusions and other blemishes. When visually presenting your diamonds to your potential consumers, you want them to have a good understanding of what they’re getting themselves into.

As such, it is recommended to use a macro lens when photographing diamonds, preferably one that allows at least 10x magnification as diamond inclusions are visible at this magnification level.

If you can, visually present a head-on photo of your diamond and a 360-degree video. The former enables your potential consumers to have an in-depth assessment of your diamond, particularly its color and clarity while the latter allows them to experience your diamond from all angles. As the video rotates, the diamond gleams in motion; thereby, making them see its sparkle.

Avoid flash photography when photographing diamonds as this is intense lighting. Instead, use a combination of hard and soft light to produce and capture the brilliance, fire, and scintillation of a diamond. Preferably, use a bright LED light positioned at a 45-degree angle to produce those effects.

Another lighting option is natural light; however, if you’re in a place with insufficient sunlight, choose a lightbox and a sparkler light. The light coming from all directions using these two will help you achieve that extraordinary sparkle your consumers are expecting to see.

Overall, a marquise cut diamond is the most difficult to photograph while a princess cut is the easiest. This is because the former has too many angles while the latter is just a symmetrical square. The smaller the marquise cut diamond is, the more difficult it is to photograph. Further, don’t forget to clean your diamond before photographing. This cleaning process will help you save so much time in the post-production stage.

Diamond photography can be time-consuming, especially if you’re not a professional photographer. This has been a major challenge for busy jewelers – an issue solved by the introduction of the GemLightbox and later on, the GemLightbox & Turntable Set.

The GemLightbox photography solution is simple as shown below.

In three easy steps using just your smartphone, you must be able to capture studio-quality results like these.

Don’t forget to watch our GemLightbox tutorial below!

What techniques do you follow when photographing loose diamonds? Let us know in the comment section below!

In this how-to guide, we’ll show how you can create professional jewelry product...

Turquoise is one of the oldest gemstones in the world. It has long been associat...

Diamond Photography: How to Make Diamonds Sparkle with GemLoupe

When it comes to diamond photography, jewelers and diamantaires have their...