Back to blog / Spinel: Resurrection of Beauty 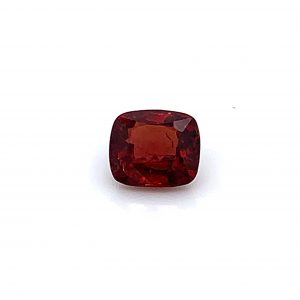 Spinel – what is it? Is it synthetic or, perhaps, a newly discovered stone?

Undervalued and unappreciated, spinel has paid a hefty price after years and years of masquerading as rubies. Most jewelers and buyers might have probably crossed its name; hence, the lack of (or weak) name recognition. But its charlatan days are over.

In this post, Picup Media has teamed up with Bangkok’s ICA | GemLab to bring you the essential details about the Phoenix of the gem world — the spinel. ICA | GemLab is the expert in the origin determination and treatment detection of colored gemstones. With our expertise in jewelry photography and videos and ICA | GemLab’s gemological knowledge and experience, we turn the spotlight on these strikingly beautiful spinels for the attention it truly deserves.

Spinel is a gemstone that is the magnesium aluminum member of the spinel mineral group. The name is derived from the Latin word “spinella”, a reference to the sharp thorns of its crystal. Dubbed as the “greatest imposter”, Spinels have masqueraded as rubies in a wide range of European Crown Jewels. Some of the world’s most notable rubies are actually spinel.

No gemstone is more deserving of the title “History’s Most Underappreciated Gem” than spinel. Spinel’s story dates back as early as 100 BCE when it was discovered in a Buddhist tomb.

Throughout history, royal courts have been supplied with spinel for thousands of years. The close resemblance between rubies and spinels resulted in such confusion that the finest quality of spinels was called Balas rubies. Some of the world’s most notable pieces of jewelry, as outlined below, contain spinels as the centerpiece.

Catherine, the Great’s Ruby, the glittering showpiece of the Russian Imperial Crown and one of the Seven Historic Stones is surprise, surprise, not a ruby! Belonging to the royal collection amassed by Peter the Great, the 398.72-carat stone is a red spinel and the second largest in the world. The stone actually boasts a long history even before it was taken to Russia.

Legend has it that the stone was found in the 14th century by Chun Li, a Chinese mercenary in Turkic conqueror Timur’s army. Chun Li found the stone in the mines of Badakhshan during his exile and attempted to present it to the emperor in hopes that he will be pardoned. Instead, a greedy palace guard murdered him and stole the stone. When the emperor found out, the palace guard was also murdered. In 1676, Nikolai Spafary, a Russian envoy who went to conduct trade negotiations with the Chinese Emperor acquired the stone and brought it back to Russia.

The spinel must have been an extremely unlucky stone to appear worldwide in Crown Jewels but not given the credit deserved. These examples of famed jewelry pieces just go to show how elusive these stones are, posing as rubies for hundreds of years. It’s such a shame that with a deep-rooted history filled with theft, betrayals, and murders, the story of spinel only properly began when Jean Baptiste Louis Rome de Lisle identified it as a different mineral in 1783.

Spinel deposits in different regions and its variety of colors are discussed further below.

The geological features of a particular region play a critical role in where various colors of spinel are found. Resistant to weathering, spinels are usually found as glassy, hard octahedrons, grains or masses in magnesium-rich igneous rocks, aluminum-rich metamorphic rocks, and contact-metamorphosed limestones. The deposits located in marbles or neighboring pelitic gneisses are widely known as sources of gem-quality material such as in Myanmar, Vietnam, Afghanistan/Tajikistan, and Tanzania. The Precambrian basement rocks of Sri Lanka are primary deposits.

Unearthing the spinel deposits in Tanzania, Vietnam, and Northern Myanmar’s Namya region had paved the way for the discovery of more striking colors such as the pinkish-red spinel unearthed from the Namya region, which next to the vivid red spinel varieties, has attracted interest and of course, higher prices.

Natural magnesium-aluminum spinel (MgAl2O4), as a gemstone, is available in a wide range of colors. The embodiment of the color wheel, they are found in red, pink, orange, purple, violet, green and blue. Some blue spinels containing cobalt can produce an attractive electric blue color, known as cobalt blue spinel.

The quality factors of spinel really depend on personal preference and can be somewhat subjective. While one may prefer blue stones, others may prefer orange. Nevertheless, the gemstone market does have a couple of criteria to weed out fine stones from the commercial stones.

When it comes to color, there is more appreciation for red spinels but pink, purple, and blue are favorites as well. Pale lavender-colored stones are more commercially available and are therefore cheaper. Any stone sized above 5 carats is considered rare and when paired with the least amount of inclusions will fetch the highest prices.

But with inclusions it can be a bit tricky – they are like a double-edged sword. Well-placed inclusions that cause the star-effect or octahedral crystal growths that appear like human fingerprints can be very beautiful. You end up sacrificing clarity for one-of-a-kind inclusions that some people may covet. It is very important to keep in mind that what is considered valuable inclusions is subjective. The majority of spinels are cut with the cushion method and shaped into an oval. When properly proportioned, it exhibits excellent brilliance.

The spectacular colors have led to many different beliefs and symbolic meanings attributed to the precious stone.

Spinel is a stone of enthusiasm that encourages optimism commonly associated with the Sun. It is believed to improve self-esteem, compassion, love and forgiveness all the while cleansing anger, pain and resentment from the body. The peridot is a complementary stone because peridot draws in resources while the spinel provides courage, energy, and stamina to support long-term goals. Combined, they represent the two Sun signs born in August, representing the fierce and tenacious determination of Virgos.

Spinels can be compared to phoenixes in the sense that they are both associated with the sun, fire, power, and beauty. Just as a phoenix would resurrect from the ashes of its predecessor, spinels have now been resurrected from the ashes of Ruby’s overshadowing – truly a mesmerizing stone that deserves the limelight.

Some stones unearthed in Burma are so flawless that locals refer to Spinel as “Nat Thwe”, translating to polished by the spirits.

Like the legendary Phoenix, spinel has risen from the ashes and returned to the gemstone paradise. From being an underrated gem, it has sprung back to life, thanks to the growing market interest, its hardness, and its variety of scintillating colors that not many other gemstones can boast of.

It’s apt to say that spinel has benefited from the way diamonds are marketed in the last century. The marketing and promotion initiatives carried out by the diamond industry for its pastel and natural-colored diamonds have helped jewelers and consumers embrace the fascinating hues of some spinel varieties. The tempered shade and the complex yet subtle intermixture of cold and warm hues in each stone may lack vibrancy but it evokes a sentimental appeal coveted in contemporary gemstones. Meanwhile, the deep and vivid shades could rival even the most resplendent sapphires and rubies.

Indeed, the diamond industry has modernized the market’s taste for beauty. Spinel is a modern gemstone that caters to that modern taste.

Spinels have been making a name for itself in the past decade. With such great interest from both gemologists and gem connoisseurs, demand is exceeding supply. The spinel vs ruby/sapphire price gap is slowly being closed. As more and more people become educated on the wonderful gemstone, acknowledgment of spinel as an exceptionally valuable gem on par with rubies and sapphire is brewing.

Indeed, the rising prominence of spinels has reflected in its price surge, which showed over a 10-fold increase in the last 10-15 years depending on the origin and color; thereby, making it a viable investment. It must be noted that some spinel colors are rarer and more valuable than other colors, which could also affect the price. For instance, red spinel is the most coveted while the purple or lavender shade has a lesser demand.

Spinel, like other gemstones, can be very tricky to photograph because it exhibits special properties that may be too difficult to capture without the proper equipment. If you did not compromise on the cut, why compromise on the visual quality of your photos and videos, knowing too well that those images and videos represent the perceived value and quality of your spinel?

If you have the highest-quality spinels, neglecting the trade part of the business doesn’t make sense. Make it work. Leverage its alluring feature by capturing its true colors! In this section, we’ll discuss how you can capture the allure of spinel in just one click using the GemLightbox and a smartphone.

The GemLightbox is a plug-and-play device that lets you capture studio-quality photos and videos in no time. Its seamless blend of LEDs and materials creates a perfect lighting environment for gemstones. The lights were thoroughly configured to ensure a 100% color accuracy every time you click that capture button. Follow the step-by-step process below for a stress-free photoshoot experience.

How to Photograph Spinels Using the GemLightbox and Your Smartphone

Remove the front reflector cover and place the spinel inside the GemLightbox. Ensure that the gem is centered.

Put back the reflector cover. Tap to zoom in and adjust the brightness as desired.

In just one click, you should be able to produce stellar photos of spinels – enticing ones that you can directly upload to your jewelry website, social media pages, or e-commerce platforms.

The spinels above were all photographed using the GemLightbox. No photo retouching was done.

Capturing 360 videos of spinels is also as easy as 1-2-3 with the GemLightbox, your smartphone, and the GemLightbox turntable. To begin, follow the steps below.

Put back the reflector cover. Tap to zoom in and adjust the brightness as needed.

Record! In just a matter of seconds, you were able to produce a 360 video that sells! Finally, don’t forget to clean your gem before the photoshoot to avoid capturing unwanted blemishes. Use gloves and tweezers when needed and download the GemLightbox App for better results. Check out more 360 videos of spinel below.

No longer a charlatan in the world of gemstone, spinel has veritably risen from the ashes of pretense. A few years ago, experts stressed, “it’s going to have its day.”

Gradually, that day has arrived.

Tourmaline, the Birthstone for October

Tourmaline, the most colorful mineral and gemstone on earth, is also the birthst...