Back to blog / How to Photograph Rubies 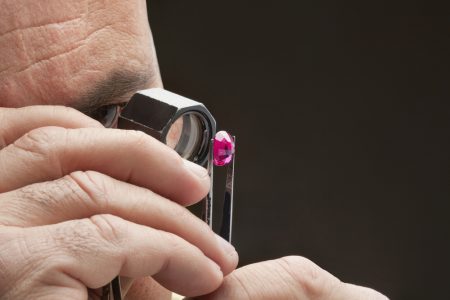 Welcome to another installment of our Gem Photography series. This post unmasks the mystery of rubies – its history, cultural associations and lore, price, quality, and value, including how to photograph rubies. If ruby is one of the gems that intrigued you and your customers the most, read on and explore what makes up the dazzle.

Ruby, the Birthstone for July

The glowing ruby shall adorn

Those who in warm July are born;

Then they will be exempt and free

From love’s doubt and anxiety.

Ruby is one of the 12 precious gemstones mentioned in Exodus 28 of the Bible and is the birthstone for July. In Sanskrit, Ruby was known as the ‘king of precious stones’ or ‘ratnaraj’ but the name ‘ruby’ was derived from the Latin word ‘ruber’, which means ‘red’.

Like sapphire, ruby is classified as corundum. Its color ranges from the lightest rose to carmine – a deep red color with a hint of purple. This color is known in the industry as the ‘pigeon’s blood’ and holds the greatest value in commerce. Although corundum is colorless, ruby is tinted by chromium which replaces the aluminum in corundum and absorbs wavelengths of light that results in color.

Ruby is second to diamond when it comes to value; however, a carat of a flawless ruby is more valuable than a fine diamond of the same size because of its rarity.

The Gem of Kings

Ruby is known to be the Gem of Kings because of the many monarchs known for their possession of fine rubies. For example, in one of his travels in the 13th century, Marco Polo narrates how one emperor offered the value of the city of Ceylon in exchange for the monarch’s ruby. However, the monarch refused and told the emperor, ‘I would not part with the ruby if all the treasures of the world were laid at my feet.’

Charles IV of Luxembourg, King of Bohemia had a crown in the 1300s ornamented with a 250-carat gem-quality ruby. Meanwhile, Princess Charlotte of Belgium reportedly owned fine rubies, which she lost when she fled after the execution of her husband Archduke Maximilian of Austria.

On the other hand, some rubies are confused with spinel. For instance, the red gem or the Black Prince’s Ruby set at the front of the British Imperial State crown was alleged to be the lost ruby of Burma (Myanmar) or the Nga Mauk Ruby, but the gem was not a ruby but a balas ruby or red spinel.

Monarchs’ involvement with gemstones, particularly with ruby, is not surprising especially in early history when gems were associated with beauty and fashion, the wealth of the country, and other political purposes.

Aside from being one of the precious stones mentioned in the Bible, ruby holds a remarkably rich historic significance.

Ancient Indians categorized ruby into four castes. The first category was the highest caste ruby (Brahmin ruby) distinguished for its pure red color. Hindus believed that the Brahmin ruby protects its owners from disasters or diseases, but this power disappears when mixed with those rubies in the lower castes. The second-caste ruby was a yellow, orange, or brown spinel while the third and fourth-caste ruby were both classified as spinel and/or balas ruby.

Without an advanced grading technology, the ruby assigned for each caste might or might not be a ruby, especially with the confusion between the genuine ruby and red spinel.

Adding some razzle-dazzle to the mystery of ruby is the myriad of magic and lore surrounding it. For instance, it was believed that rubies could protect their wearer from battles when worn as a talisman. Other folklores talked about its protective power and healing properties that could cure digestive ailments, heart dysfunction, and snakebite among many others.

Overall, while beliefs may vary, ruby has always been known in many cultures to be a symbol of passion, power, and protection. With its unsurpassed vibrancy, ruby is said to stimulate the heart, stir the blood, and promote self-confidence, motivation, and determination.

Ruby is known for its rarity, value, and hardness. Second only to diamond with a Mohs hardness value of nine, rubies are much harder to cut and shape than other gemstones. Color, clarity, cut, and carat weight affect ruby’s quality. For instance, its monetary value decreases if its inclusions affect its brilliance. Moreover, fine-quality rubies bigger than one carat are rare; hence, their monetary value increases as the carat weight increases. Finally, the origin of the ruby is also a significant factor in valuation.

The following are three of the world’s famous rubies.

Commonly described as one of the world’s finest and largest star rubies, this 138-carat Sri-Lankan Star Ruby was owned by advertising mogul Rosser Reeves before he donated it to the Smithsonian Museum in 1965. This ruby was revered for its beautiful five-ray star and valued at US$40 million.

Crafted from the world’s largest mined ruby, the Liberty Bell Ruby was sculptured for the 1976 US Bicentennial celebration and was adorned with 50 diamonds. The sculpture weighed four pounds with 8 ½ thousand carats.

Unfortunately, the Liberty Bell was stolen from Stuart Kingston Jewelers in 2011. The police arrested the robbers but they failed to recover the Liberty Bell, which was worth US$2 million.

Reportedly the most beautiful pigeon’s blood and the most expensive ruby, Burma’s Sunrise Ruby was a 25.59 carats piece set into a Cartier ring flanked by white diamonds. The gem was sold for a record auction price of US$30 million.

Photographing gems like rubies may be too complex for jewelers who are not professional photographers. This is because the result demands color accuracy while also highlighting its salient characteristics.

When photographing rubies, think of the way it was cut as cuts are fashioned in such a way that it would show the gem’s best color when you look at them straight down and perpendicular to the table. The cut also determines the type of light you should use. For instance, diffused lights are perfect for faceted gems. It also softens shadows and helps you achieve the best color for the gem. A mix of diffused and direct lighting can add sparkle to a transparent piece of stone.

Another consideration is whether you would use a white or black background. The latter adds drama while the former reduces distracting shadows and focuses the viewer’s attention on the gem because of the absence of cluttered surroundings. You don’t need to spend a large sum of money to capture gems on a white background as you can improvise using the materials found in your home like a roll of white paper. However, improvisation only works if you’re only going to photograph a piece less frequently. If gem photography is something you do quite often, investing in photography equipment saves you time and money in the long run. Either way, decide whether you are after a dramatic photo or an accurate depiction of the gem and you would know the right background to choose.

How to Photograph Gemstones Using a Smartphone

Over the few years, Picup Media has focused on smartphone jewelry photography. However, over the past few months, we’ve had an increasing number of questions and requests for gemstones. That’s why we’ve…

Our clients at Picup Media use the GemLightbox for all their gem and jewelry photography needs. The process using the GemLightbox is simple and studio-quality results are achievable in just a click of a button using just a smartphone.

To capture studio-quality photos and 360-degree videos of rubies using the GemLightbox & Turntable Set, simply follow the steps below.

In just seconds, you’re able to capture images and 360-degree videos with perfect color accuracy. See some of the rubies we captured below.

For concerns and inquiries about the GemLightbox, contact us here and we’d be happy to assist.