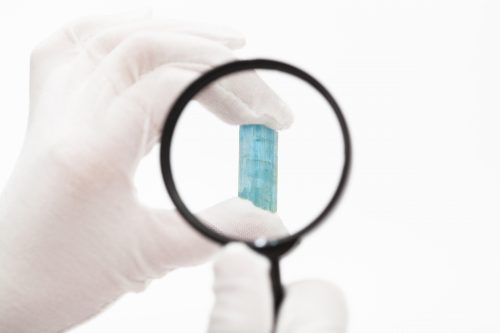 This month we celebrate Aquamarine, the official birthstone for March.

In this Gemstone Photography series, we’ll discuss everything about Aquamarine—its name, historical significance, symbolism, and photography. Follow along as we turn the spotlight on this beauty, a gem that seems to appear from the depths of the sea.

The lovely Aquamarine, which seems to have come from some mermaid’s treasure house, in the depths of the summer sea, has charms not to be denied

Aquamarine, the Gem of the Sea

The name aquamarine comes from the Latin words “aqua” meaning “water” and “marina,” “of the sea.”

Unlike other gemstones, aquamarine has a narrow color range. It ranges only from blue-green to blue; however, the color might fade upon prolonged exposure to light. As a member of the beryl family, it’s known that pure beryl is colorless, but trace amounts of iron cause its refreshing colors.

The trace amount of iron oxidizes into two states. The Ferrous iron is responsible for the blue hue and the Ferric iron for the yellow color, which when combined with blue produces the greenish-blue color.

Aquamarine forms in cavities under the earth’s crust when magma comes in contact with the right minerals. This rock is called pegmatites. When magma interacts with the rocks, it produces heat leading to a chemical chain reaction. Pegmatites contain cavities and the slow underground cooling allows enough time for large crystals to form in those cavities. Meanwhile, the late-stage timing provides a supply of the beryllium, the mineral needed to form beryl.

Brazil is the world’s number 1 source of gem-quality aquamarine, but other countries are also identified sources. Some of these countries are Afghanistan, Kenya, Madagascar, Nigeria, and Pakistan.

Aquamarine is the official birthstone for March and the gemstone representing the 19th wedding anniversary.

Throughout history, aquamarine has been associated with water and the seas.

Aquamarine jewelry and amulet have been around for at least 3000 years, owing to Egyptian, Greek, Roman, and Sumerian references. It’s not difficult to link aquamarine to the power of the ocean due to its serene color; thus, the Greeks called it the sailor’s stone. It was that stone that ancient people took to sea to ensure a safe return.

The earliest recorded appearance of aquamarine was in 1609 in the published gemological work, ‘Gemmarum et Lapidum Historia‘ by Anselmus de Boodt.

There are plenty of myths that surround aquamarine.

The Romans believed that a frog carved on an aquamarine could reconcile warring parties. Meanwhile, in Medieval times, aquamarine was believed to revitalize the love of married couples.

Further, in ancient literature, it was common to find works referring to aquamarine as a divining tool. For people in the Middle Ages, it was a powerful fortune-telling stone. Methods of fortune-telling varied. For instance, people then would cast the aquamarine ball in a bowl of water in which the water disturbance would reveal messages. Moreover, other people in ancient times used it like a Ouija board.

Meanwhile, folklores held aquamarine as a stone of victory, especially in legal disputes and battle, and healing. Aquamarine’s healing properties are also fascinating. According to ancient times, this serene sea-water gem was effective for curing toothaches and other disorders of the liver, throat, and stomach. Aquamarine was also a known antidote for poison. As such, it reached popular demand at the time when poisoning royalty members were notorious.

Perhaps due to its cooling effect and refreshing color, aquamarine is associated with feelings of serenity, tranquility, harmony, and clarity. Moreover, its sea-blue color doesn’t only represent transformation, but also hope, faith, loyalty, vitality, purity, and life.

Overall, aquamarine is connected to the earth and many believed it could heal the land.

Whether you’re selling or buying aquamarine, here are the critical factors to look for when it comes to this seawater gem.

While aquamarine can be cut into any shape, an emerald cut is the most popular as it complements the stone best and maximizes clarity and color.

As a type 1 gemstone, aquamarine gems are usually without any visible inclusions. Hence, the best quality is clean with excellent transparency, clarity, and shine.

Aquamarine gems are available in large sizes. If you want an intense color, the gem must be over 5 carats. On the other hand, smaller sizes are usually pale.

How to Photograph Semi-Precious Stones with GemLightbox
Read more

How to Photograph Aquamarine with the GemLightbox

In this section, we’ll demonstrate how we photograph aquamarine using the GemLightbox, the world’s first smartphone jewelry photography solution. Designed to be a jewelry smartphoneography device, the GemLightbox allows you to capture studio-quality photos and 360 videos in just one click.

Step 1. Power up the GemLightbox and remove the front reflector cover.

Step 2. Set up the GemLightbox turntable inside the box.

After powering up the device, set up the GemLightbox turntable inside the box.

You may click here to watch how to set up the turntable completely.

Step 3. Place the aquamarine jewelry inside the GemLightbox.

When you have completely set up the turntable, place the aquamarine jewelry inside the GemLightbox. Make sure that the ring is centered to prevent it from moving farther away from the center when the turntable rotates. After that, put back the front reflector cover.

For this demonstration, we photographed a 12-carat aquamarine and white gold diamond ring.

Step 4. Position your smartphone and open the GemLightbox app.

The GemLightbox application is available to download on both the iOS App Store and the Google Play Store.

The GemLightbox app optimizes your smartphone camera settings for jewelry, gem, and diamond photography—ensuring a studio-quality result in every single click. Learn more about the GemLightbox application here.

From the app, you can make adjustments you think are necessary. You can zoom in or out, choose the speed if you’re taking a 360 video, or adjust the brightness level. Once you’re happy, you can click to capture.

Don’t forget to click ‘save’ immediately after photographing to save the images or videos to the GemLightbox app gallery. This allows you to easily share them with your followers on social media or email them directly to your prospective buyer—no photo retouching required!

How to Photograph Diamonds
Read more

Watch the full video demonstration of the aquamarine photography below!

How Can Jewelry Brands Use Influencer Marketing?

The Eternal Love for Chain Bracelet