Back to blog / Gemstone 101: What is London Blue Topaz? 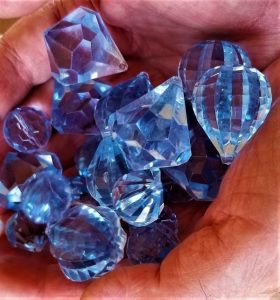 In this gemstone series, we’ll talk about topaz, specifically London blue topaz. Follow along and pick up facts, history, and more as you read on.

What is London Blue Topaz?

Coming from the exceptionally wide variety of Topaz colors, London blue topaz is a dark blue topaz with medium to dark tone and saturation. Compared to the Swiss blue topaz, London blue is more valuable and a market favorite.

Apparently, natural blue topaz is rare as natural topaz is mainly colorless. As such, most blue topaz in the market today are treated with radiation.

To achieve the color, they expose topaz to radiation in a nuclear reactor. Upon exposure to fast neutrons, the radiation changes the color centers of the stone, which produces a deep blue color. Other stones require further heat treatment to lighten the inky color.

Many people have raised concerns about the safety of blue topaz due to radiation; however, there are strict rules in place for consumer protection. For instance, in the USA, companies that treat gemstones with radiation must be licensed by the Nuclear Regulatory Commission. Additionally, gemstones that are treated this way are radioactive; thus, they are stored for months until the radioactivity reduces to a safe level.

The name ‘topaz’ relates to the Sanskrit word ‘tapas,’ meaning fire. They also associate it with the Egyptian island of Topazios, although the island never produced topaz but rather olivine—often confused with topaz—and peridot.

Germany’s Erzgiberge Mountains were the first known source of yellow to brown topaz until a large topaz deposit came about in the 1730s in Brazil. Brazil remains to be the largest producer of topaz in the world.

The Ostro: The Famous Blue Topaz

The Ostro is the largest blue topaz displayed in the UK’s Natural History Museum’s Minerals Gallery. British Explorer Max Ostro discovered the rough material in 1960, from which the Ostro was cut from.

Blue topaz echoes the energy of knowledge and wisdom; hence, stone believers commonly associate it with clarity of feelings, honesty, self-confidence, and the ability to learn complex ideas.

Perhaps because of its color, blue topaz is also known to symbolize calmness and peacefulness, and it’s also ideal for spiritual attunement.

Blue Topaz, such as the London blue topaz, is a birthstone for December.

How to Care for and Clean Topaz?

With only a score of 8 on the Mohs Hardness Scale, topaz requires extra care and attention to keep it looking beautiful. It’s not tough because of its basal cleavage, which makes it prone to breakage.

To care for and clean topaz jewelry the right way, considering the following.

How to Photograph London Blue Topaz with the GemLightbox Macro

In this section, we’ll show you how to photograph London blue topaz using the GemLightbox Macro and a smartphone.

First, power up the GemLightbox Macro by pushing the power button on the side of the box. Afterward, remove the front reflector cover.

If this is your first time using Macro, ensure that you set up the smartphone holder first for ease of use in the future. You can watch the complete setup process here.

Step 2. Put the London blue topaz inside the box, on the stone holder.

Next, place the London blue topaz inside the Macro on the stone holder or disc.

The three different colors are white, grey, and black. Each disc in varying sizes can hold stones from 1ct to 10ct and above.

After placing the gem inside, don’t forget to put back the front cover.

Then, put your smartphone on the smartphone holder and open the GemLightbox app.

The GemLightbox app is available to download for both iOS and Android users.

You may click here to know more about the features of the GemLightbox app.

With the GemLightbox app, you can capture a video of London blue topaz and other gemstones from a 360 angle, 90, and 45 in either slow or fast rotation.

In just a few steps, we were able to capture photos and videos of London blue topaz at different angles with 10x magnification. See the results below.

Watch the complete Macro demonstration below.