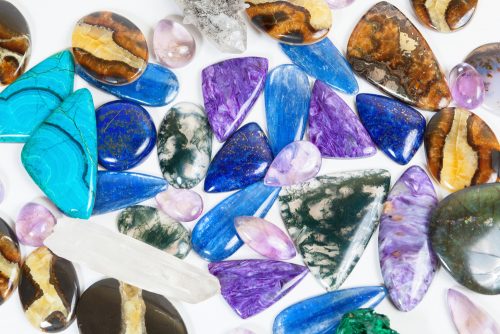 In this final installment of our Gemstones Photography series, we bring you everything about topaz, citrine, and tourmaline – from tidbits and histories to effortless steps on how to photograph semi-precious stones with GemLightbox.

The history of the term precious stone could be traced as far back as the 19th century when it was used to refer to popular, rare, and valuable gemstones such as diamonds, sapphire, ruby, and emerald. However, the qualification of precious stones back in the day was not only limited to these big names as it also included stones like amethyst and pearls – both considered rare at that time until large deposits were found.

If you’re one of the many who are often confused by these terms no matter how arbitrary the differences are, the key to remember is that all other gemstones that are not diamonds, sapphire, emerald, and ruby are considered semi-precious stones.

There’s a long A to Z list of both precious and semi-precious stones. In this segment, we’ll only focus on a few like topaz, citrine, and tourmaline.

Topaz, while inexpensive, is the hardest silicate mineral and also one of the hardest naturally occurring minerals with a rate of 8 on the Mohs Hardness scale. Topaz, an allochromatic, is popular for its beautiful colors, which are attributed to its impurities or defects in its crystal structure.

The most common impurity in topaz is iron, but iron itself does not result in color but rather, it births another species in the crystal that results in atomic level imperfection. This atomic-level imperfection gives topaz its color of yellow, brown, and blue. Meanwhile, chromium creates pink-red to purple topazes. But don’t settle. Topaz is also pleochroic, which means it can display different colors in varying crystal directions.

In the absence of defects and impurities, topaz is colorless and translucent; hence, it is commonly sold and would pass as a diamond replacement.

Topaz, a November birthstone, derived its name from the Sanskrit word “tapas’ or “fire.” Others claimed it came from the Greek word “topazios,” which name was derived from an island in the Red Sea called “Topazios (which was likely Ziberget),” meaning “to seek.”

Pliny the Elder, a natural philosopher and naturalist, recounted the discovery of green crystals in the island of Topazios. While Zebirget is known to be the source of peridot, the name topaz was used to refer to green gemstones in ancient times.

History recorded a series of beliefs concerning the stone. For instance,  yellow topazes birthed a belief that they have a mystical power to attract gold while those from the Middle Ages believed that topaz had the power to aid monarchies in acquiring goodwill.

Like other stones in this series, topaz was also an amulet, which when worn could protect the wearer from any harm may it be in the aspect of health or dark magic. It was also believed to be a protector against disasters such as fires and other accidents. In Indian culture, topaz was believed to foster long life, intelligence, and beauty when worn above the heart.

Overall, topaz has been popularly associated with wealth and health.

Referred to as precious topaz, the imperial topaz – a golden-orange to pink-orange stone, as if mimicking the beautiful colors of the setting sun – is the rarest color of topaz; thereby, making it the most coveted topaz.

The imperial topaz derived its name from the 17th century-Russian czar who claimed exclusive rights to the pink topazes mined in the country.

The Blaze is considered to be the most famous imperial topaz in history. It weighed 97.45 carats and is currently on display in the Field Museum of Natural History in Chicago, Illinois.

How to Photograph Diamonds
Read more

Citrine, along with topaz, is a birthstone for November. It is a transparent quartz mineral which color varies from yellow, orange, orangey-red, and at times, brown. A trace of iron causes citrine’s yellow and orange color while others are attributed to the colorizing agent built into its crystal lattice.

Most of the citrine gemstones on the market is a product of heat treatment given that natural citrine is a rare occurrence. Sometimes, heat-treated amethyst is also referred to as citrine or ametrine for others. It’s been said that the richness of color of a yellow citrine is dependent on the original color of amethyst.

Citrine, which colors have often been compared to autumnal hues, has been an ornamental gemstone for thousands of years. The name citrine, derived from the French word “citron” meaning lemon, was first recorded in 1385 when it was used to replace the name yellow gemstone or yellow quartz. Citrine is also known as Spanish topaz and gold topaz in other cultures.

The Egyptians were among the first people to discover citrine. They used it as a protective stone against many ailments and as a talisman. Meanwhile, the Ancient Greeks in the Hellenistic Period used it as a decorative stone between 300 and 150 B.C. They also carved it into different images and rock crystal ornaments. On the other hand, the Scottish carved citrine and from it formed dagger and sword handles while the Roman priests created rings from it.

Among the ailments said to be cured by the gemstone were digestion, venomous snake bites, eye problems, abnormal blood circulation, and pancreas and spleen-related diseases. Further, its color which gives it a warm vibe was remarkably noted to alleviate seasonal affective disorder.

To date, citrine is popularly present in designer jewelry pieces; but this was not an evolution as it has decorated many jewelry pieces since the 1940s. Its vibrant sunny color has not only made it ideal for stylish and bold pieces but it also aptly validates the belief that citrine is a gift from the sun and therefore, a perfect merchant’s stone as it is associated with wealth and success noting that citrine can manifest abundance in all areas in life.

How to Photograph Sapphires
Read more

Tourmaline, along with opal, is a birthstone for October. It comes in many varieties and all colors, including multicolored and bicolored stones as the one in the video above, that are attributed to its chemical composition. This means that despite sharing a similar crystal structure, the chemical and physical properties vary.

Tourmaline is pyroelectric, which means the gem attracts dust and other particles when warmed. Unlike other gems that are usually naturally colorless, this semi-precious stone is rarely without colors. It is dichroic – composed of two colors – and like topaz, pleochroic – composed of even more colors that change when viewed from different directions and angles.

Given its plethora of colors and varieties, tourmaline is known to be the industry’s chameleon gem. It is notable for its tendency to imitate other gemstones.

Understanding its physical system becomes easier the moment you unravel the meaning behind its name. Derived from the Sinhalese word “Thoramalli” meaning stone with mixed colors, tourmaline is like a rainbow in all seasons.

According to the Gemological Institute of America (GIA), tourmaline was first discovered in the 1500s in Brazil by a Spanish conquistador. Back then, the explorers were in search of gold but found blue and green stones instead, which at first, were mistaken for sapphires and emeralds. Since then, tourmaline was used to make jewelry pieces for royalty and the elites.

Brazil has always been a major source of different gemstones, among these were tourmalines discovered in 1800s. At that time, tourmaline remained to be either any unidentified stone or stones camouflaging as sapphires and emeralds among many others due to the lack of technology and advanced mineralogy. As such, the first commercial tourmaline mine was discovered in the USA in 1821. The commercial supply was further expanded following other tourmaline discoveries in countries like Afghanistan, Mozambique, Nigeria, and Tanzania to name a few.

Tourmaline is not only colorful in looks but more so in stories that surround it. It has been associated with Saturn, the God of Time and the planet itself while the Ancient Egyptians believed that this alluring gem got its colors from journeying to the center of the earth and broke through a rainbow’s surface; thereby, collecting all its colors.

What an interesting legend, isn’t it?

Like other gemstones, tourmaline was revered for its healing properties and powers. For instance, artists believed that tourmalines fuel artistic inclinations and inspiration while magicians used it as a talisman to protect them against evil energy. Further, depending on colors, our chameleon gem was also believed to reverse negative energies, relieve anxiety and depression and other painful body inflammation.

Paraiba’s electric and sometimes, neon color set it apart from other tourmaline varieties for although Brazil is home to many tourmaline varieties, none is as remarkable as the striking color of Paraiba, which is attributed to the trace amount of copper in its crystal structure. Further, Paraiba is revered for its rarity. It has been said that there is only one Paraiba tourmaline for every 10,000 diamonds mined; hence, it is one of the most valuable and most coveted gemstones in the world.

How to Photograph Rubies
Read more

In How to Photograph Gemstones Using a Smartphone, we mentioned about the challenges involved in gemstone photography, which would require a different skill and equipment to meet the demands. This is because gemstones, as discussed in this series, exhibit special physical properties that need to be considered before shooting to ensure a jewelry image or 360 video that does not only showcase the piece but also showcases its best features. For instance, the importance of lighting and movement to demonstrate the dichroism of tourmaline and the pleochroism of other gemstones.

As such, this section is dedicated to capturing gemstone photos and 360 jewelry videos using the GemLightbox and your smartphone.

Step 1. Simply place your gemstone inside the GemLightbox and make sure it is centered.

Step 2. Open the GemLightbox app and make necessary adjustments. Zoom in as desired for a complete white background and tap to focus.

Do you have a favorite semi-precious stone? Let us know in the comment section below and we might just feature it in the next gemstone photography series.

5 Reasons to Use 360 Product Videos

How to Build an Email List for Your Jewelry Store