Back to blog / What is Rubellite Tourmaline, the Stone of Perfected Heart? 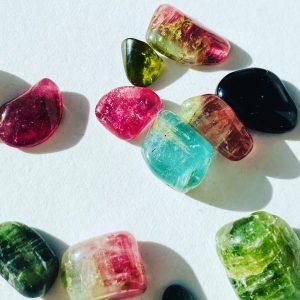 In this installment of the Gemstone Photography Series, we’ll talk about the rouge tourmaline that’s often confused for ruby—the rubellite. Know about its basic facts, history, and significance as well as simple photography tips with the GemLightbox Aerial.

Rubellite, also known as red tourmaline, is a transparent gemstone from the colorful family of tourmaline. Its name came from the Latin word ‘rubellus’ which means ‘reddish.’ The trace element of manganese produces its color, which varies from violet and dark red to dramatic pinkish-red; thus, making it comparable to ruby. However, unlike the magnificent precious stone ruby, the rubellite tourmaline is a rare and multi-faceted gemstone. Owing to its rarity, color, and beauty, rubellite is the most expensive member of the tourmaline family.

Further, rubellite is a pyroelectric stone. This means that it can generate electric potential when heated. It is common for these red tourmalines to have inclusions and buyers often value untreated rubellites because of their rarity and beauty. Be careful though, as not all red tourmalines are rubellite as the name only applies to red tourmalines with high saturation.

A Brief History of Tourmalines

Tourmaline owed its worldwide recognition to its American roots. Known as the American gem in the 1800s, it was George Kunz, a Tiffany gemologist, who had turned the spotlight on these colorful gems. He was also highly credited for creating the modern market for colored gems.

Despite its American beginnings, China was the popular market for red tourmalines. In fact, California shipped its tourmalines to China for the Chinese Dowager Empress Cixi who was fond of the rubellite’s color. She kept Californian mines in business until she died in 1911.

Learn how to photograph and sell your chakra bracelet and jewelry in the metaphysical market. Click the link and read on to know more!

Rubellite is said to be connected to the heart chakra and the root chakra. This connection makes the gem a source of good-flowing prana or a life-giving force; thus, it provides healing to the mind, body, and soul. It also revitalizes passion and strengthens loving commitments.

Above all, rubellite is a stone of the perfected heart as its connection to the heart chakra paves the way for love—the kind that transcends earth and reaches out to the universe. It is full of love, life, passion, and joy.

Additionally, rubellite is known for its many uses throughout history. As a pyroelectric gemstone, it is believed to help neutralize the harmful effects of electronics. It also serves as an electrical tuning circuit for radio and TV frequencies.

Metaphysically speaking, believers count on rubellite’s power to treat motion sickness, enhance the sense of smell, and treat digestive system disorders. For the brokenhearted, it soothes the heart as it promotes universal healing and conditions the self for the free-flowing energy of positivity, survivability, and stability.

How to Photograph a Rubellite Tourmaline Pendant?

In this section, we’ll demonstrate how to photograph a red tourmaline pendant using the GemLightbox, Turntable & Aerial set.

To begin, we need the following:

Step 1. Power up and remove the GemLightbox front reflector cover.

After powering up the device, get the necklace holder that comes with the GemLightbox, Turntable & Aerial set. Then, wrap the necklace chain around the holder. Keep wrapping around until you reach the length that you want.

If this is your first time using the GemLightbox Aerial or if you’re just curious to know how it works, you may watch the complete Aerial setup tutorial here.

In continuation of our Gemstone Photography series, let’s now unravel the character that makes sapphire a valuable gemstone and, in the process, a royalty symbol. Towards the end, you will...

Step 3. Place the pendant inside the GemLightbox.

Now, place the pendant inside the GemLightbox. To do this, attach the necklace holder to the magnetic base of the GemLightbox Aerial. Make sure it is secured nicely. Then, put back the front reflector cover.

Step 4. Position your smartphone and open the GemLightbox app.

The GemLightbox app is available to download on both the iOS App Store and the Google Play Store.

Click here to know more about how the app helps you capture studio-quality jewelry images and videos.

Don’t forget to save your videos and images to the GemLightbox app gallery for easy access in the future. You can also send it directly to your clients via e-mail or post it to your social media pages for your audience to admire.

See the final capture below.

Learn how to photograph diamonds in this installment of the Gem Photography Series. Click the link for more details!

Tourmaline, the Birthstone for October

Tourmaline, the most colorful mineral and gemstone on earth, is also the birthst...