Back to blog / Amethyst, the World’s Most Popular Purple Gem 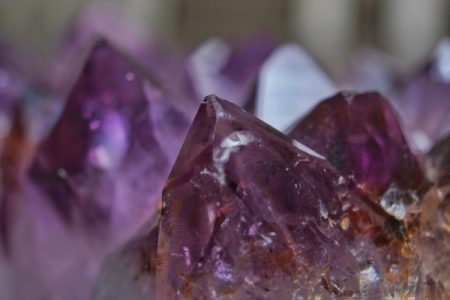 I’m not particularly fond of purple. While others see it as a symbol of wealth and royalty, I look at it as a representation of death or mourning. It’s similar to how the Victorian times considered purple (and other dark colors) a half-mourning color, and in catholicism, a liturgical color that can symbolize pain, suffering, and mourning. But amethyst, I found out through regular reading, is far from the darkness of death. With a striking wine-like hue and for being the birthstone for February, amethyst has changed its character over time. It has even advanced its reputation for being the gem of royalty. But what really makes it the world’s most popular purple gem? Amethyst, it turns out, bristles with interesting stories to tell.

The name “amethyst” comes from the Greek word “amethystos,” meaning “not intoxicated”, which birthed the belief that the gem protects the wearer from drunkenness. Its color ranges from purple to reddish-purple with light to rich and vivid saturation. Amethyst can be light lilac, purple, reddish-purple, or violetish-purple.

Amethyst owes its color to iron impurities, irradiation, and other transition metals. The intensity of the color—from light to dark—may differ from one angular zone to another due to varying amounts of iron incorporated into different stages of the crystallization process. This uneven distribution of color in a gem refers to color zoning.

How to Use the GemLoupe for Gem Photography

Do you want to know how to photograph gemstones in one click? Click the link and learn how to use the GemLoupe for Gem photography!

Like other gemstones, our purple gem formation involves different factors coming together.

Amethyst needs a hollow space for the crystal cavity to form, which is inside volcanic rocks. Their walls become the base for amethyst formation, which results in geodes. Geodes are plain-looking spherical rocks but don’t be fooled, as when opened, this rock reveals a cavity filled with charming crystals.

Next is the environment. For amethyst to form, silica and ferric iron must be present in the water. This silica-rich liquid forms crystals, but there must also be gamma irradiation to facilitate other processes inside the volcanic rock.

Lastly, time. Amethyst geodes take millions of years to form. It’s the most basic requirement but also one of the most important.

Scientifically, there’s not a lot of research on how amethyst geodes form, but the general scientific agreement states that it involves a two-step process.

Yearning for Yellow: The Beauty of a Yellow Diamond

A yellow diamond is like beautiful sparkling sun rays. Get to know more about this sunshine in this new installment of Gemstone Series. Read now!

Where is Amethyst Found?

Russia was the primary source of this purple gem superstar until the 19th century when large deposits were discovered in Brazil. Such a discovery made Brazil the current major supplier as the country produces the most amethyst in the world. However, you can also find this purple quartz in other parts of South America, Asia, and Africa.

The birthstone for February, amethyst carries a lot of folkloric associations, symbolism, and metaphysical property claims. Perhaps, the most famous is the myth surrounding the Roman god of wine, Bacchus.

According to Greek Mythology, Amethyste, a beautiful virgin maiden was on her way to the Temple of Diana when she crossed paths with Bacchus. Bacchus was pursuing Amethyste but she refused his love, which angered the god of wine. Amethyste cried to the virgin Goddess Diana and asked to help her remain chaste, to which the goddess answered by transforming her into white shimmering quartz. Humbled by her desire to remain chaste, Bacchus poured red wine over Amethyste—already a white stone—to show his respect, which then transformed the white quartz into a purple crystal we now know in the form of amethyst.

Several different versions of the mythology have circulated throughout time but as different as they were, these stories all claimed that it was through Bacchus that the purple gem was revered for its power to prevent drunkenness.

Amethyst carries the energy of spirituality, passion, and sobriety. It quiets the mind and stimulates a meditative state; hence, its power to cleanse negative energy while bringing a protective shield of light. Furthermore, if you’re into chakra, this purple gem can stimulate the third eye; thus, it is known to be the Stone of Spirituality for the spiritual development it offers.

Additionally, amethyst, for its tranquilizing effect, is said to cure insomnia and is good protection against recurring nightmares and dark vivid dreams.

Citrus Citrine, the Birthstone for November

Citrine, the birthstone for November is considered rare. A rarity that makes it one of the top-selling tawny-colored gemstones. Click the link to know more!

Famous Amethyst in the World

Below you will find three of the popular amethyst gems and geodes found in the world.

The largest amethyst geode ever found, the Empress of Uruguay, is an 11-foot tall, 2.5 ton of purple gem. Currently the top attraction in Australia’s Crystal Caves Museum, miners took three months to extract the geode from the basalt that served its home for about 130 million years.

The accursed stone landed on British soil but a series of bad luck had befallen its owners. To date, the Delhi Sapphire has known to be on display at the Natural History Museum as part of its Vault Collection of precious gemstones.

With a deep rich purple color, this 96-carat amethyst stone is surrounded by old European cut diamonds. It has a filigree top and a fleur-de-lis motif in platinum and yellow gold undercarriage.

The amethyst heart brooch was donated to the Smithsonian in 1973 and it’s on display at the National Museum of Natural History.

The finest amethyst is the one with a strong reddish-purple color or one that has no visible color zoning. Avoid amethyst that’s too dark as it looks black under dim light conditions. Amethyst with light color or those with visible zoning has a lower value.

From round to pears, ovals, emeralds, and marquises, among many others, you can cut amethyst in a wide range of shapes and cutting styles.

Amethyst’s size does not dramatically increase its price; hence, it’s common to find them as a large center stone. They’re also available in varying sizes.

Learn about the story of turquoise, the national gem of Tibet, in this another instalment of Gemstone Series. Click the link and read on!

How to Photograph Amethyst with the GemLightbox

Now that you’ve gotten to know the majestic characteristics of this world-famous purple gem, let’s take a look at how we photograph it using the GemLightbox and a smartphone.

Step 1. Open the GemLightbox and remove the reflector.

For this amethyst photography demonstration, we photographed the necklace from the top.

To photograph from the top, remove the cover to place the jewelry inside and then, put the cover back.

Step 2. Remove the diamond piece from the lid and position your phone on the top

Next, position your smartphone on the top. Don’t forget to open the GemLightbox app on your phone so you can capture studio-quality results.

The GemLightbox app optimizes your smartphone camera settings for jewelry photography. From the app, you can make necessary adjustments like zoom in or out, tap to focus or adjust the brightness level as desired.

As you can see, the GemLightbox allows you to capture fine details as well as the true color of the stone. See the final photo below.

Watch the complete GemLightbox demonstration below to see how effortless amethyst photography could be.