Back to blog / Think Pink: An Inside Look at Pink Diamonds 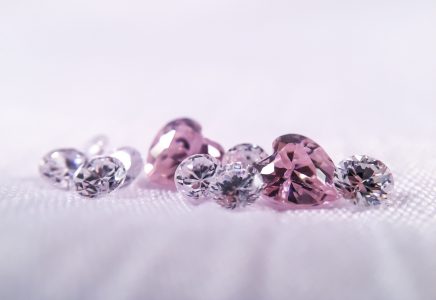 What makes pink diamonds pink? Are pink diamonds rare? Let’s take an inside look at one of the world’s rarest gemstones and discover why everybody loves them. Follow along!

A Brief History of Pink Diamonds

Pink diamonds are one of the oldest diamonds in the world and have existed for 1.6 billion years. Further, they are not only old, but they are also the rarest.

Historically, the first pink diamond was said to have been discovered in the Kollur mine in India which was part of the Golconda Kingdom. They have also been found in Brazil throughout the 17th and 18th centuries, as well as in countries like Canada, Russia, and South Africa until their discovery in Australia.

Australia’s Argyle diamond mine, the world’s fourth-biggest diamond producer, has also become the world’s largest supplier of natural colored diamonds. At one point, Argyle produced 90% of the world’s pink diamond supply although fewer than 1% of the mine’s output was actually pink diamonds; thereby, making them the rarest of the rare.

Yearning for Yellow: The Beauty of a Yellow Diamond

A yellow diamond is like beautiful sparkling sun rays. Get to know more about this sunshine in this new installment of Gemstone Series. Read now!

The End of an Era: Diamond Mines are Not Forever

The Argyle Mine closed in November 2020 proving that while diamonds are forever, the supplies are not. This closure only makes pink diamonds even rarer and more valuable. Rio Tinto, the owner of the Argyle Mine, delivered a dazzling penultimate showcase in the 2020 Argyle Pink Diamonds Tender. The Tender presented a collection of 62 rare pink and other rare colored diamonds from a year’s production.

Reportedly, the final Tender is set for 2021.

What is Morganite, the Popular Diamond Alternative?

What is morganite? Get to know more about this popular pink diamond engagement ring alternative. Click the link & read on!

While other diamonds acquire their color from chemical impurities, for instance, yellow diamond from nitrogen and boron for blue ones, the same cannot be said for pink diamonds as these impurities have not been found in them.

Other scientists have also discovered that pink diamonds have pink zones only that alternate with clear areas. They call these zones twin planes—a form of shock as a result of volcanic activity. When these twin planes form and have contact with each other, this defect gives rise to pink color.

Like other gems, pink diamonds come in different shades. Based on the traditional diamond grading system, your pink diamond can have a grading of faint, very, light, light, fancy light, fancy intense, fancy deep, and fancy vivid. This is different from the Argyle grading method where they divide the pink diamonds into four categories:

Based on its color density, each category gets a number between one (1) to nine (9) while pink champagne only goes until three (3). A number one (1) indicates the highest color intensity while nine (9) has the lowest color intensity. As such, following the Argyle grading method, the highest quality purplish-pink diamond would get a grade of 1PP, 1P for pink, and 1PR for pink rose.

Tickled Me Pink: The Most Popular Pink Diamonds in the World

Due to its rarity, beauty, and value, it’s not surprising that the wealthy and famous covet these beautiful pink gems. Below, you will find the most popular pink gems throughout history.

The world’s largest cut pink diamond, Daria-I-Noor is a whopping 186-carat pale pink gem discovered in the Kollur Mine in India. The gem is currently part of the Iranian Crown Jewels.

Owned by Graff, the marquise-cut 22.84-carat purplish-pink diamond was believed to have been bought in the rough before it was set to make a complete pink diamond engagement ring.

The Hortensia is a 20.53-carat light pink diamond with a five-sided outline mined from India and is one of the Golconda diamonds. It was named after the Queen of Holland, Hortense de Beauharnais, and is part of the French Crown Jewels.

The Noor-ul-Ain or Light of the Eye is another Golconda diamond. This 60-carat pale pink, oval brilliant-cut diamond is now part of the Imperial Crown Jewels collection. Reports stated that the Daria-I-Noor and the Noor-ul-Ain came from the same rare 400-carat, pale pink diamond known as the Great Table Diamond by the 17th-century French Traveler and expert gem trader, Jean-Baptiste Tavernier, who had first seen it at Golconda.

Just because it doesn’t have a similarly deep historical tale as the others, it doesn’t mean it can’t be part of the league. The Sakura Diamond is a 15.81-carat fancy vivid purple-pink internally flawless type IIA diamond that’s predicted to fetch $38M at the auction happening on May 23, 2021. With its size, Sakura is the largest purple-pink diamond to ever appear at the auction.

Sakura, or cherry blossom which is the national flower of Japan, symbolizes optimism and renewal. With its charming appearance and romantic vibe, it’s easily the star of Christie’s Magnificent Jewels sale this May in Hong Kong.

Get to know the rubellite tourmaline in this another installment of the Gemstone Photography Series. Click the link and read on!

Aside from the fact that pink diamond is mysterious given that scientists were unable to pinpoint exactly the defect causing its color, this rosy gemstone is a breathtaking beauty that best represents loving emotions. For instance, during the Elizabethan era, pink spoke of love, passion, tenderness, and happiness.

And why not? true love could be as rare as a pink diamond.

How to Photograph Pink Diamonds with the GemLightbox

In this section, we’ll show you how we photograph and take 360 videos of an Argyle pink diamond using the GemLightbox Macro.

The GemLightbox Macro (and GemLoupe!) is the newest addition to the GemLightbox jewelry photography solutions. It captures 10x magnified loose stone images and 360 videos beautifully using just a smartphone.

Step 2. Place the pink diamond on the gem holder inside the Macro.

After removing the front reflector cover, place the rosy gemstone on the gem holder inside the GemLightbox Macro and then, put back the cover.

Meanwhile, the colors are white, grey, and black; thereby, allowing you to take photos and 360 videos on different solid-colored backgrounds to match your marketing and sales messages.

Learn how to photograph diamonds in this installment of the Gem Photography Series. Click the link for more details!

For this Macro demonstration, we captured a 0.74ct radiant-cut, VS2, 5PR Argyle pink diamond on a black background using an iPhone. The GemLightbox app allows jewelers and diamond dealers to capture videos at a 45, 90, or 360-degree angle.

After taking images and 360 videos, don’t forget to save them on the GemLightbox app gallery where you can easily post them to your social media platforms or email them directly to your buyers without photo retouching required!

See the results below!