Back to blog / Tanzanite: The Gemstone of a Generation

Tanzanite: The Gemstone of a Generation 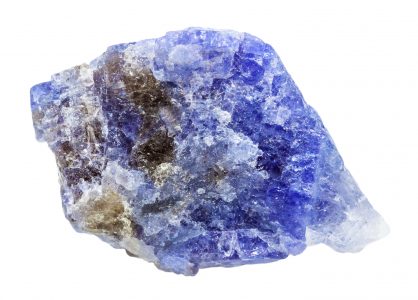 Unlike other ancient gemstones that have long been part of history, Tanzanite is a relatively modern gem discovered only in 1967. It’s beautiful with vibrant and vivid colors ranging from light blue, lilacs, indigo, and deep violet; however, its rarity seems to work against it.

Let’s dig deeper to understand Tanzanite’s missed potential in a world that glitters.

The circulating story about the tanzanite’s discovery begins in 1967 in the Merelani Hills near the town of Arusha in Tanzania. Maasai tribesmen found blue crystals and notified Manual d’Souza of the discovery. Manuel d’Souza, also known as “Mad Manuel” was an Indian tailor who traveled the world prospecting for gold and gems. Upon notification, Mad Manuel immediately registered for mining claims.

D’Souza initially thought that he was mining precious sapphires. News traveled fast and the mining claims grew further within a short period of time. Eventually, what were thought to be sapphires were then identified to be tanzanites.

Tiffany & Co was the first company to recognize such a beautiful discovery. They thought it could rival sapphires in beauty and color, but instead of calling it blue zoisite, which sounded like “suicide,” they named it “tanzanite” in recognition of its exclusive geographic origin, Tanzania.

Immediately after a well-publicized campaign in 1968, Tiffany & Co made tanzanite a popular gem among colored gem professionals. It was revered for its color, clarity, and size.

How Was Tanzanite Formed?

Experts believed that the tectonic plate activity and extreme heat and pressure that formed Mount Kilimanjaro was the same event that produced the tanzanite deposit.

Nature produced tanzanite 585 million years ago through the process called regional metamorphism. In this process, tectonic plates collide. The igneous rock of each tectonic plate morphs into one another because of extreme heat and pressure. When these rocks reach near melting point, they produce crystal structures, which then form the gems.

Each of the two combined plates contains varied minerals, which when mixed can be unique to one area only. This unique combination probably explains the rarity of tanzanite and why it’s only found on this side of the world.

Learn more about the refreshing beauty of aquamarine and the ways to photograph this birthstone for March. Click the link and read on!

Colors and Other Characteristics

The chemical element vanadium (V) causes tanzanite’s blue color. Unlike other gemstones, tanzanite easily appeals to many buyers, especially to those who are interested in blue topaz and sapphire but don’t have the budget. Its range of colors, which appears from vivid to light blue also comes in different tones and saturation levels. As with other colored stones, the most vivid tanzanites fetch high prices as they are more valuable. However, many would still buy tanzanite with light to medium tone and light to medium saturation at lower prices.

Tanzanite is also pleochroic. This means that the gem can show different colors when viewed from different crystallographic directions, but this pleochroism also makes the cutting process more complicated.

Perhaps because of its color and other physical and chemical properties, tanzanite is known to be a stone of transmutation. It emits high vibration energy that not only protects its wearer but also allows for spiritual exploration and profound meditation. They say that tanzanite unifies the heart and the mind; thereby, creating a balanced life that is guided by a compassionate heart and an enlightened mind.

Furthermore, tanzanite is believed to revitalize and detoxify the body. It enhances intuition and stimulates positive perception, which can soothe and calm a troubled soul.

At 242 carats, the Queen of Kilimanjaro tiara is one of the largest faceted tanzanites in the world. The tiara, surrounded by 803 rare tsavorite garnets and 913 diamonds, resembles a king cobra with the tantalizing tanzanite as the center stone.

This tiara is now part of a private collection owned by Apple’s first president and now, a gem collector, Michael Scott.

Beauty for a cause, the Kat Florence necklace features 423.56-carat tanzanite, decorated with brilliant-cut diamonds weighing a total of 57.65 carats and mounted on an 18 karat white gold.

The Kat Florence tanzanite necklace was among the jewelry collection auctioned at the Magnificent Jewellery Charity Auction. It was worn by actress Sarah Jessica Parker and sold for HK$2,360,000. All proceeds were donated by Florence to build a school in Nepal after the devastating Nepal earthquake in 2015.

Designed for Disney’s Belle of Beauty and the Beast, Chopard’s “Belle” necklace easily puts you in a fairytale mood with its filigreed lace collar design embellished with pink and blue sapphires and punctuated with a 69-carat tanzanite center stone.

What is Morganite, the Popular Diamond Alternative?

What is morganite? Get to know more about this popular pink diamond engagement ring alternative. Click the link & read on!

Aside from its pleochroic property, rarity, and richness of color, these four quality factors also determine tanzanite’s overall value.

Deeply saturated tanzanite is more valuable compared to the paler ones although the latter is more common.

Inclusions in light-colored tanzanite can decrease its value.

Although you can find tanzanite in a wide range of cuts, you’ll notice that cushion cuts and oval cuts are the most common in the market.

Tanzanite is available in large sizes, but like other gemstones, it is more abundant in smaller sizes. Small tanzanite typically has lower saturation compared to larger stones. As such, tanzanite must be larger than five carats to display fine colors.

The Rarity of Tanzanite

Despite the big difference in value, tanzanite is a thousand times rarer than diamonds because of the process of its formation over 500 million years ago. According to a Tanzanian geologist, there’s only one in a million chance of finding tanzanite in other places on earth. Unfortunately, with the current rate of mining, experts predict that tanzanite deposits will be depleted within the next 25 to 30 years; thus, making tanzanite the gemstone of a generation.

This rarity poses a challenge to the industry—how can you build a sustainable and resilient industry that not only supports the livelihood of those that work within it and its surrounding areas but also ensures the future of tanzanite?

As a jewelry professional, what solution can you contribute to the industry? How can you uphold the true value, not only of tanzanite but other gemstones as well, in the most ethical way?

We would love to hear your thoughts. Let us know in the comment section below!

5 Popular Diamond Cuts or Shapes for 2021

How to Encourage Repeat Jewelry Purchases

Are repeat jewelry purchases possible?Some say that jewelry is not commonly...

How much jewelry inventory should you own and how do you manage it? Inv...