Back to blog / Engagement Rings for Men: Traditions are Changing 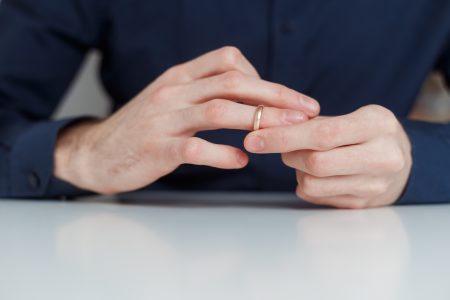 But what’s really behind this uptrend? Is this just a fad that would wane anytime soon or a reliable turn away from tradition with a solid footing?

What are Men’s Engagement Rings?

Like women’s, men’s engagement rings also symbolize commitment. It’s a tangible statement to the world that they have found the love of their lives. However, not every man has the obligation to wear one. It’s all about preferences. If a man chooses not to wear one, that’s good. but if he chooses to wear an engagement ring, that’s good, too. Men, women, and same-sex partners can both share the fun.

The key here is to remember that men’s engagement rings are for those who want one, including those in the LGBTQ+ community.

The 5 Biggest Engagement Ring Trends for 2021

Find out the 5 biggest engagement ring trends this year before popping the question to your beloved. Click the link and read on!

You probably didn’t think about it, but men do wear engagement rings. In fact, this isn’t a new trend, but rather a continuous trend development that started a couple of years ago. For instance, in 2012, 17% of polled men said they would wear an engagement ring.

When you think about it, the idea of a man wearing an engagement ring has existed long before today, but the trend has not fully caught up because many jewelers have been pushing it aside.

Men’s engagement rings have also been the subject of many public forums, including the subreddit r/wedding, as seen below.

It’s been almost a decade since the interest erupted and it hasn’t dissipated, but further intensified as more and more male personalities and couples outside the limelight embrace this turn.

The jewelry trends 2021 are out! Click the link and read on to find out how to stay stylish and fashionable as the world prepares for the new normal.

How Should a Man Wear His Engagement Ring?

Traditionally, especially in western countries, women wear their engagement ring on their left ring finger. This tradition is rooted in the belief that this finger had a vein connected to the heart. The Romans called it, “the vein of love.” However, this is not the case for every country.

Just as there’s no one type of engagement ring, there’s also no one proper way of wearing it unless you’re following cultural ties or norms.

For instance, in India, Hindu males and females wear their engagement rings on the right hand traditionally as the left hand is considered impure. Over time, however, this tradition gets broken as some choose to follow the western tradition.

Meanwhile in the Netherlands, engaged Protestants would wear their engagement ring on the left hand and then, move it to the right after marriage—signifying their acceptance of commitment.

As you can see, the designated ring finger is not the same in all cultures and countries. As such, it brings us to the conclusion that men can wear their engagement ring anywhere they want it. The choice is theirs! After all, this is about the expression of love and commitment. But more than that, it’s also about the changing gender norms and gender role fluidity. Thus, designating one right way of wearing it defeats the ethos of freedom, self-expression, and empowerment.

How to Sell Jewelry to Self-Purchasing Women

How to sell jewelry to self-purchasing women (SPW)? If you have observed the recent trends, you’ve probably already noticed the way women are transforming the marketplace – Women no longer...

What Makes this Trend a Trend?

Men’s engagement rings are becoming increasingly popular because of the different driving forces behind it.

This spending carries over to their engagement ring spending. Gay men, on average, spend $5,719 on engagement rings compared to $5,349 for their counterparts.

Who should do what?

The traditional model of men proposing to women is no longer the only way to propose. Sure, society still ostracizes women who break free from relationship traditions; however, times are a-changing. We’re talking about the rest of your life, as a woman or a member of the LGBTQ community, so why wait around if you can go, get it?

Fortunately, not everyone is comfortable with a primitive state of mind. Proof of it is the fast-changing attitude towards marriage proposal. In a study of singles in America, Match.com found that 95% of men want women to make the first move. Meanwhile, 70% of men would be psyched if women popped the question.

If this is not a sign of shifting gender roles and crushing social taboos, then what is?

As we’ve mentioned at the outset, men donning their engagement rings is not a new trend. It has always been there but has only recently gained traction. Thanks to celebrities like Ed Sheeran and Michael Bublé, who have, over time, helped influence the trend by not shying away from celebrating equal marriage rights.

Overall, the growing demand for fine jewelry among male shoppers has fueled the increasing attention towards men’s engagement rings.

Perhaps, we could say that masculinity played a role in men’s attitude towards jewelry, especially in the past. Jewelry was often considered a female domain; hence, when Tiffany & Co. announced its collection of men’s engagement rings for the first time in history, it made a noise. It’s an acknowledgment of the changing times.

But the change is not confined only to the engagement ring industry. Men are getting more adventurous in style and accessories, backed by modern style icons and personalities like Harry Styles, Kanye West, Trevor Noah, John Mayer, Jay Z, and Chadwick Boseman, among many others. All of which were spotted with their liberated approach to jewelry.

If that was not proof enough, you can check out the figures. For instance, Anchor & Crew reported a 70% increase in online purchases of men’s jewelry compared to its sales in the previous year.

Generally, many jewelers were quick to notice the remarkable increase in purchases of men’s jewelry, particularly during the lockdown, which in part, was driven by self-purchasing males.

Marketing to Millennials: How to Sell Jewelry to This Group

Five psychographic data every jeweler must understand when marketing to millennials and selling jewelry to younger consumer groups.

All of this isn’t new to the jewelry industry, but the resistance to adapt to the changes in consumer attitudes and social norms has been delayed a lot, that it has now become inescapable. When you have major influences from the entertainment industry pushing it further at the forefront, you just have to heed the demand.

So how have you been responding to the call? Have you noticed any significant changes in sales of men’s jewelry, particularly in engagement rings? What style sells the most? Let us know in the comment section below!