Back to blog / How to Photograph Sapphires 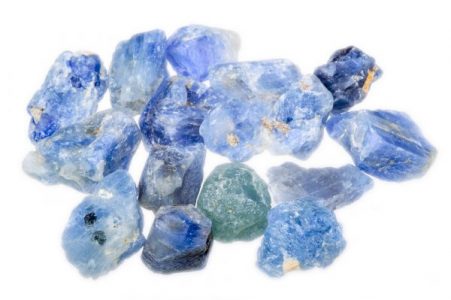 In continuation of our Gemstone Photography series, let’s now unravel the character that makes sapphire a valuable gemstone and, in the process, a royalty symbol. Towards the end, you will also learn how to photograph sapphires in a way that encapsulates its story.

Sapphire, the King of All Blue Stones

Sapphire is the birthstone for September and like ruby, belongs to the corundum species. The word “Sapphire” comes from the Greek word “Sappheiros” which means “blue color,” although not all sapphires are blue as the name also applies to any corundum species that are not red also known as ruby. Other gem-quality corundum such as green, yellow, purple, and orange among other hues are referred to as fancy sapphire.

You can say that sapphires are unique from one another as its colors are dependent on the trace mineral content present in its crystal structure. For instance, a sapphire with chromium in it will be pink in color while blue sapphire gets its color from the presence of iron and titanium in its crystal structure. The classic blue sapphire varies by color saturation and ranges from medium to deep color saturation, but the most valuable is the cornflower blue sapphire, which is a medium-dark violet-blue tone.

Sapphire is one of the big three jewels with the other two being ruby and emerald.

The Stone of Romance, Royalty, and Wisdom

While other precious gemstones were claimed to be the gem of royals, sapphire is here to prove itself as the rightful king to the throne as kings, queens, and prominent personalities across histories donned this what others called the stone of divine favor.

Just before he left to conquer Milan, Napoleon gave Josephine a gold ring with pear-shaped blue sapphire and diamond. The stone weighed one carat each. Although, their romance did not last as Josephine did not love the emperor as much as he loved her and she was known to have had many affairs, the engagement ring did stand the test of time after it was auctioned for $948,000 in 2013.

Not only the largest but also the most mysterious of all sapphires, this Blue Giant of the Orient, weighing 486 carats, was discovered in Sri Lanka in 1907. You would think a stone as massive as this would hardly go unnoticed, but the gem actually evaded the public eye for centuries after an American collector bought it. However, in 2004, the Blue Giant resurfaced as the largest faceted sapphire ever auctioned at the Christie’s Magnificent Jewels Auction. While the gem raised no bids, it was later bought by a mysterious buyer for $1 million through a private sale after the event. This beauty continues to be elusive and exclusive only to a privileged few.

The Stuart Sapphire, which name comes from the royal house of England and Scotland (House of Stewart), is a 104-carat, cabochon-cut, oval-shaped blue sapphire. While its early history is not well documented, many believed it first appeared in the 13th century and had since passed from Scottish King Alexander II (1214-49) down to the English king Edward IV (1461-83) and was then incorporated in the state crown.

Today, the Stuart Sapphire can be seen mounted on the brow of the Imperial State Crown just below the Black Prince’s Ruby. The Crown is on display in the Tower of London.

Controversy once surrounded this ring as Kate Middleton’s blue sapphire engagement ring was previously Princess Diana’s and as reported, the royal family did not like the ring when Prince Charles proposed with it due to the lack of exclusivity.

Nonetheless, the halo engagement ring highlights a 12-carat deep-blue sapphire surrounded by a halo of melee diamonds set on a platinum band. The Duchess of Cambridge’s ring was so elegant that when she revealed it a decade ago, it revived a trend in colored gemstone engagement rings.

The Rockefeller sapphire, once belonged to John D. Rockefeller, is a 62.02-carat rectangular-cut sapphire mounted in platinum. Reportedly, Rockefeller bought this single-stone ring from Mir Osman Ali Khan, the last Nizam of Hyderabad.

For Christie’s, the Rockefeller sapphire is a masterpiece revered not only for its striking cornflower blue hue but more so for its exceptional rarity and nearly perfect cut, clarity, and color quality.

Lore and Other Symbolic Meanings

Aside from many biblical references, sapphire has compounded different symbolic meanings across different cultures and religions that associate it with the heavens. For instance, lore has it that the tablet containing the Ten Commandments was made of sapphire.

For many kings, explorers, and the Cingalese – an ethnic group in Sri Lanka, sapphires bring protection from harm. Sir Richard Francis Burton, a British explorer and Oriental traveler, also held the same belief as evidenced by his talisman – a large star sapphire – which he took with him wherever he traveled.

Sapphire is also popular among necromancers and the like. For example, it was said to provide protection against witchcraft but at the same time, a favorite among witches and magicians as it allows them to bridge to the spirit world and awaken their third eye. Perhaps, it is its celestial quality that had helped develop the belief that this stone could enlighten one’s spiritual and internal self; thereby, making one aligned with the power of the universe.

On the other hand, not everything about sapphire revolves around sorcery and black magic. It was also reportedly coveted for its healing properties and self-improvement aids, which primarily touch on one’s mental state such as promoting peace of mind, enhancing focus and attention, dispelling negative thoughts and energies, and other neurological disorders.

As mentioned previously, cornflower blue sapphire is considered the most valuable sapphire. Additionally, blue sapphires in medium to medium-dark hues also command the highest prices per carat while too dark and pale blue hues are less valuable.

You are highly likely to find sapphires with inclusions in varying types such as mineral crystals, color zoning or the uneven distribution of color within the stone, color banding, and other particles.

As in most cases, inclusions influence the value of the stone; however, not all inclusions translate to a decrease in value. For instance, some tiny inclusions in Kashmir sapphire can give it a velvety look that makes it more visually appealing without compromising its transparency.

The cut of a gemstone determines its color quality; hence, the cut significantly influences the value of sapphire.

Cushion, oval, and round are three of the most popular cuts for sapphire.

Although sapphires come in a range of sizes, large but commercial-quality ones are more available than large, fine-quality sapphires. Further, as with any other gemstones, expect its per-carat price to increase with overall carat weight.

Bear in mind that the quality variations differ for each color

If you think photographing jewelry is challenging, you’ll soon realize (or probably already know) that photographing gemstones is trickier. The cuts of the gems require different lighting and it is this lighting that determines the quality of your photos.

Unlike other jewelry pieces, taking a single light source that focuses directly on your subject does not always work best when it comes to photographing sapphires. Often, you would find yourself needing to control the reflections and the amount of light that comes in during your photoshoot. Different lighting methods may also be necessary.

When photographing sapphires, consider preparing the following tools and accessories.

It is very common for jewelers to get torn between using a white background and a black background when photographing jewelry and gemstones. The key to easy decision making in this aspect is to know your end goal. For instance, if you want your potential buyers to feel romance, you’d probably photograph on a black background as it creates drama, and drama evokes emotions.

On the other hand, if you’re photographing for your product page, your jewelry store, and other marketing and promotional content, you might find a white background more effective in fulfilling these goals as white looks more professional. It is clean, non-distracting, and allows your buyers to assess the gem without it hiding from scene-stealing props and striking backgrounds.

Additionally, contrast is another factor to consider when deciding between these two backgrounds. Fundamentally, the rule is that light-colored pieces look better on darker background and vice versa. Each has its own advantage. For instance, a black background photo could easily reduce the time you have to spend in post-production; however, finding a perfect black background might be challenging for you, whereas you can easily improvise a white backdrop. It is cheaper and effortlessly executable. The downside of a white background photo is in the post-production stage, especially if you’re a non-professional photographer and not very tech-savvy.

Mixing different light sources, incandescent and fluorescent, for example, can be problematic because they have different color temperatures. As such, it is recommended to use a single-color light source only to achieve an overall balance between all the colors in your image.

Furthermore, between diffused and direct lighting, the former is more preferred when it comes to capturing the best and most accurate color of your sapphire as diffused light evens out the light intensity and softens the shadows. This is not to say that direct light should be evaded. In fact, direct lighting when mixed with diffused lights can add sparkle to your gem.

How to Photograph Sapphires Using the GemLightbox

The GemLightbox is an excellent tool for jewelers. It simplifies the photography process in three easy steps using just your smartphone. It is a great time-saver and jeweler-friendly as it requires no technical knowledge to operate.

What you will need:

To capture photos and 360-videos using the GemLightbox, simply follow the steps below.

Do you know other tips on how to photograph sapphires? Let us know in the comment section below!