Back to blog / Emerald: The King of Jewels 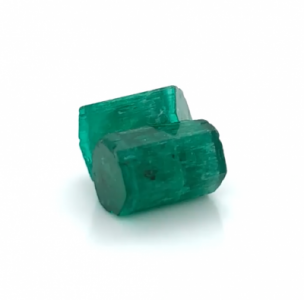 Emerald is a mesmerizing variety of the mineral Beryl. With colors ranging from bluish-green to green, emeralds are formed from a combination of the elements aluminum, beryllium, oxygen, and silicon. The traces of chromium and vanadium present in this fascinating stone give it its intense green color while its bluish color is attributed to the traces of iron.

What’s in a name?

The cultural history of emerald varies from places to places, which leads to a diverse set of meanings. But first, let’s dissect the name.

The name “emerald” is derived from an ancient Persian word, translated to Latin “Smaragdus,” which originated from Greek “σμάραγδος” meaning “green gem”. The Roman Scholar, Pliny first suggested that emerald belonged to a beryl family. Science proved him right in the 19th century.

Indeed, no stone has a color that is more delightful to the eye, for, whereas the sight fixes itself with avidity upon the green grass and foliage of the trees, we have even more pleasure in looking upon the emerald, there being no gem in existence more intense than this.

Emerald stands for a lot of things. It symbolizes compassion, hope, renewal and growth, unity, and unconditional love. Its relaxing color is said to give mental clarity, destress and comfort weary hearts and those in a depressive disposition — something that Pliny the Elder had recorded in his accounts of Natural History. He noted the sedative effects of this precious stone to lapidaries who restored their energies and removed their weariness by looking at the emerald. To date, green is not only believed to calm the mind but also soothe the eyes.

Further, emerald’s soft color, which also stands for abundance, prosperity, and health, is also associated with the heart chakra and believed to nurture the heart and revitalize the spirit. Perhaps, this could be one of the many reasons why many heralded it as ‘the stone of successful love.’

If spinel is called the Phoenix of the Gem World, the emerald has established its presence as the King of Jewels and history has all the proof.

Wadi Sikait in Egypt was the world’s first known emerald mine. Egypt was said to be the only source of green beryl stones, especially of the emerald, for the Mediterranean region and the ancient European civilizations. The mining activity in Wadi Sikait started in the Ptolemaic period and ceased upon Spain’s discovery of Colombian emeralds in the 16th century AD. Colombian emeralds were said to be of superior quality.

If you were to ask the literature, the emeralds had been prominent in Egypt as far back as the 18th dynasty but reports surfaced claiming that the emerald mining evidence in the county could only be found in the Ptolemaic times, which even then was barely sufficient. Reports believed that the 18th dynasty accounts were a result of amazonite, a formation of green microcline or tectosilicate mineral, misidentified by archaeologists as emeralds.

Cleopatra adored the emeralds so much that she claimed the emerald mines in the country, especially those in the Sikait Valley, a personal property. Aside from adorning Roman palaces with the emeralds, this precious stone was also used for lavish jewelry, as gifts to visiting dignitaries, treatment to eye diseases, and a symbolic accompaniment to the dead upon burial.

The Emeralds of the Incas

The emeralds were part of the loot during the Spanish conquest in the 16th century as the Incas had been using this precious stone for 500 years back then. It was used in their jewelry, religious rituals, and other ceremonies.

The lost riches of Incas have fascinated many archaeologists, explorers, and treasure-seekers. Among them was Barth Blake in 1886 who found ‘golden vases full of emeralds.’ Blake wrote that he could not move it on his own, so he took what he could carry and left the site with a plan to return after raising funds for the expedition; however, Blake just disappeared and those who attempted to trace his steps to the lost emeralds also faced their demise.

Archaeologists believed that Colombian natives traded and mined the emeralds as early as 1000 BC; however, upon the arrival of the Spanish in 1499, the Spanish invaders took over the mining areas and reduced its natives to slavery. It was reported that the extracted emeralds were used for European royalty, nobles, and aristocrats.

After the Colombian independence in 1810, the Colombian government reclaimed control of the emerald mines and started the mining privatization; however, a Green War erupted as the Colombian drug cartel penetrated the industry. The war did not last, albeit thousands of lives were lost, as the Emerald Czar, Victor Carranza, struck a peace deal in 1990.

Since then, multinational companies and other foreign investors have proliferated in the Colombian mining industry alongside the continuous and stronger efforts to establish and maintain stricter rules and regulations including transparency and the elimination of violence and social injustices to make the industry more viable and its image more marketable to today’s social-conscious consumers.

The Emeralds of the Panjshir Valley

An emerald green so pure and bold, it must be from the Panjshir Valley, so they say. The emeralds of the Panjshir Valley were off the radar before the early 1970s because of several reasons. First, westerners’ had limited access to the area due to the regional political instability and second, because of the Soviet occupation of Afghanistan at that time. Although it was possible that the Panjshir emeralds existed earlier than reported. In fact, Pliny the Elder, in his accounts of first century A.D., mentioned Bactria’s ‘smaragdus’ — a term used to identify green stones including emeralds.

Bactria, as reported, was an area inclusive of today’s Iran and Afghanistan. Pliny the Elder, Marco Polo’s exploration, and reports from other geologists from different countries did very little to the discovery and popularity of the Panjshir Valley until in 1977 when the United Nations Development Program, as cited in the report of the Gemological Institute of America (GIA), published a detailed listing of names and locations of the Panjshir Valley emerald mines. This had also opened the discussion on Afghanistan’s emerald deposits.

Below is a 360-video of a 3.87-carat Panjshir emerald from Clarity Enhancement Lab, New York. This 360-video was captured using the GemLightbox, the GemLightbox turntable, and an iPhone. No photo editing/retouching was applied.

Emerald is the most popular beryl family member with a price that escalates rapidly with size and color. Taking all factors into account, the price of a small, low-quality emerald may vary from USD10 per carat to USD 50,000 per carat for a remarkably clean gem. It is typical for most emeralds to have inclusions (internal clarity) and blemishes (external clarity) and these inclusions, more than any other precious gemstones, are tolerated more in the case of the emerald.

Color, with consideration to hue and saturation, is a significant factor in determining its value. The most valuable and desirable emerald is bluish-green in color to medium and medium-dark tone with vivid saturation.

In 2018, a 5,655-carat emerald weighing 2.5 pounds was unearthed at Kagem in Zambia Africa, the world’s largest emerald mine. As reported, ten percent of the stone’s sale value, as promised by Gemfields, a British mining company that owns 75 percent of the mine, would be divided between two local lion conservation groups; hence, the massive emerald was given the name “Inkalamu” meaning “lion” in Zambia’s local language. The emerald was estimated to be worth up to £2 million and was sold to DiaColor, an Indian gemstone specialist, for an undisclosed amount.

Photographing the Emeralds with the GemLightbox

Photographing emeralds could be a pain, especially for non-professional photographers. Its beautiful, intense, and vivid color is difficult to capture. The inclusions might also appear more prominent than it already is. As such, it is critical to shoot in an environment that enables color accuracy and a realistic visual presentation of the stone.

In this photoshoot session, Picup Media used the GemLightbox, a plug-and-play device that lets you capture studio-quality jewelry photos and 360-videos with just one click. The GemLightbox revolutionizes the way you photograph gemstones by simplifying the process. It solves most, if not all, of the common mistakes and challenges you might encounter, especially the ones mentioned previously. For instance, photographing emeralds inside the GemLightbox assures you of a color-accurate result because it is equipped with built-in features that let you do just that. Additionally, its lighting environment is perfect for capturing real-life visual images of the emeralds, including inclusions, without making it more prominent than it actually is in reality. Accurate product presentations online are important in establishing trust and confidence in your brand. What your customers see is what they get.

To begin photographing emeralds, simply follow the steps below.

Remove the reflector cover and put the emeralds inside the GemLightbox; make sure it is centered. Then, put back the cover and get ready to shoot.

Point your smartphone camera. Tap to focus and adjust the brightness as required.

If you’re an iOS or Android user, don’t forget to download the GemLightbox App for more consistent results and easy file transfer.

The GemLightbox is second to none when it comes to simplicity, especially when capturing 360-videos. Follow the same steps above to experience the GemLightbox’s 360 Effect. Just don’t forget to put the GemLightbox turntable inside, which is an add-on device that allows you to capture 360, 90, and 45-degree videos of emerald.

See our captured 360-videos of emeralds below, produced by the innovative effect of the GemLightbox. The emeralds were provided by Clarity Enhancement Lab, New York.

Photographing an emerald in an upright position, like the emerald by Clarity Enhancement Lab shown below, is another excellent way of attracting attention. Here, we used wax to hold the emerald in its position. Use as little wax as you can to keep it less visible in the photograph but if unavoidable, you can also send your images to expert photo retouchers, like Picup Media, to remove the visible props from the photo for a more professional look. There was no retouching done in the video below.

“When we were presented with the GemLightbox, it was a very unique product that caught our eye and we thought that this would help us a lot with helping show customers the before and after of what their stones would be before treatment and after treatment, so it was great. It’s something that we’ve been using now for a while and a lot of the customers have appreciated this product. It really helps them; it really helps the photo and the video quality of seeing the stone in the best kind of light without having to block out all the windows. It gives you a nice, stationary amount of light where you don’t have to worry about anything else. It’s simple and easy to use.“